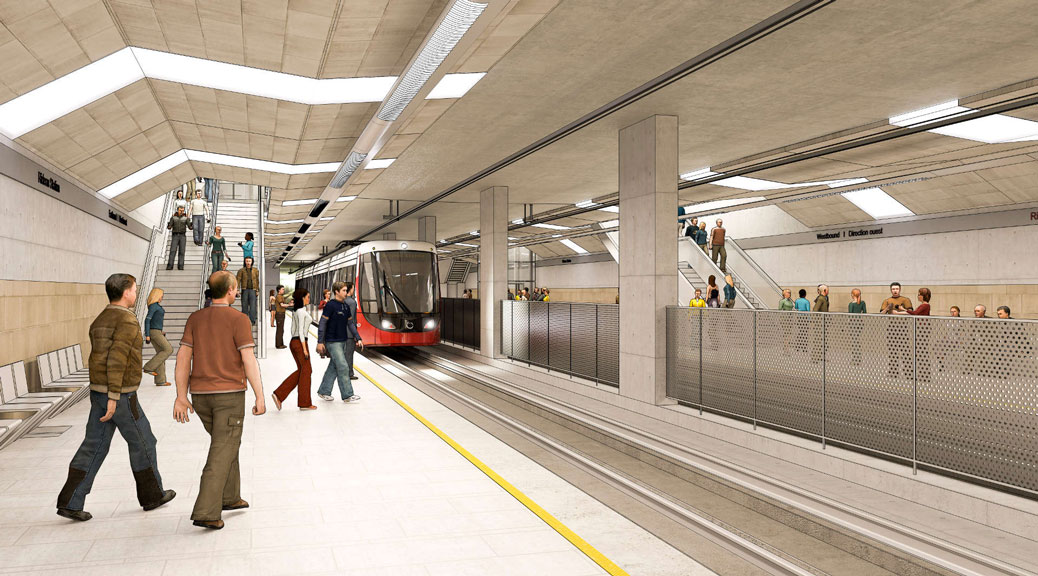 (ABOVE: Artist’s rendering of the Rideau LRT station downtown. Via City of Ottawa.)

It was great to see City Council approve plans for Phase 2 of light rail transit (LRT) today. The $3-billion project includes an extension of the rail line west from Bayshore to Moodie Drive by 2023. That’s good for all west end commuters.

But there’s one thing that’s bugging me: I keep hearing councillors and other officials use the phase “bringing light rail closer to Kanata”.

We need to change that line and start saying “bringing light rail closer to Stittsville.”

This map is from the City of Ottawa’s latest Transportation Master Plan, and shows what planners have in mind for the west end’s “ultimate transit network”, sometime after 2031. The red is LRT, and extends to Huntmar Drive.  The blue lines are dedicated bus Transitway, extending all the way to Fernbank Road.

So far, so good.  But none of the plans are set in stone.  My worry is that there’s a chance that councillors might be tempted to build tracks toward the high tech business park in Kanata North, before extending it west through Kanata South and Stittsville. There’s already a lightly-used freight rail corridor along the route.

The Kanata North BIA, a  group representing businesses in that area, is already trying to make the case that the high tech employment hub should get light rail ASAP.

I commute to that area daily and I agree that transit service is dismal, but as a Stittsville resident I want to make sure that light rail comes to our neighbourhood first, as has been long-planned planned. After all, with all the new housing in our area we’re projected to double in size to 70,000 residents within a couple decades. That’s going to make for one heck of a commute downtown.