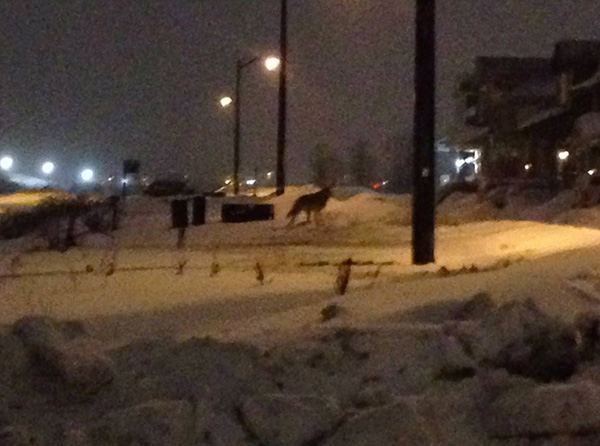 One of my favourite things about summertime is Stittsville is sleeping with the windows open and hearing howling coyotes in the distance.

Up until a few weeks ago, I’d never seen one.  Then one day while driving down Huntmar, I saw a pair of small coyotes hanging out in the field north of the Arcadia subdivision.

Since then several neighbours have shared photos they’ve taken of coyotes around Stittsville, very close to residential subdivisions including Fairwinds.  (One person recently reported seeing a dead coyote on Hazledean Road near Johnwoods.)

We had some company follow us on the walk this morning. Photos don't show how close he was to us! @LokiDoberdog #suburbanwildlife #coyote pic.twitter.com/VrXD3oTlQ4

Coyotes prey on rodents and small mammals, fruits, grasses, vegetables and garbage. According to the Ministry of Natural Resources (MNR), if you see a coyote you should:

The MNR also suggests that you keep your dogs at night, spay/neuter your dogs (coyotes are attracted to, and can mate with, domestic dogs). Coyotes are also attracted to dog feces, so there’s yet another reason to pick up after your pet.

LET US KNOW: Have you had an encounter with a coyote? Add a comment below or email feedback@stittsvillecentral.ca

Lots of coyote sightings in Ottawa this month. Same every year at this time. No reason for fear. Learn to co-exist. https://t.co/1bvgUM4V7E