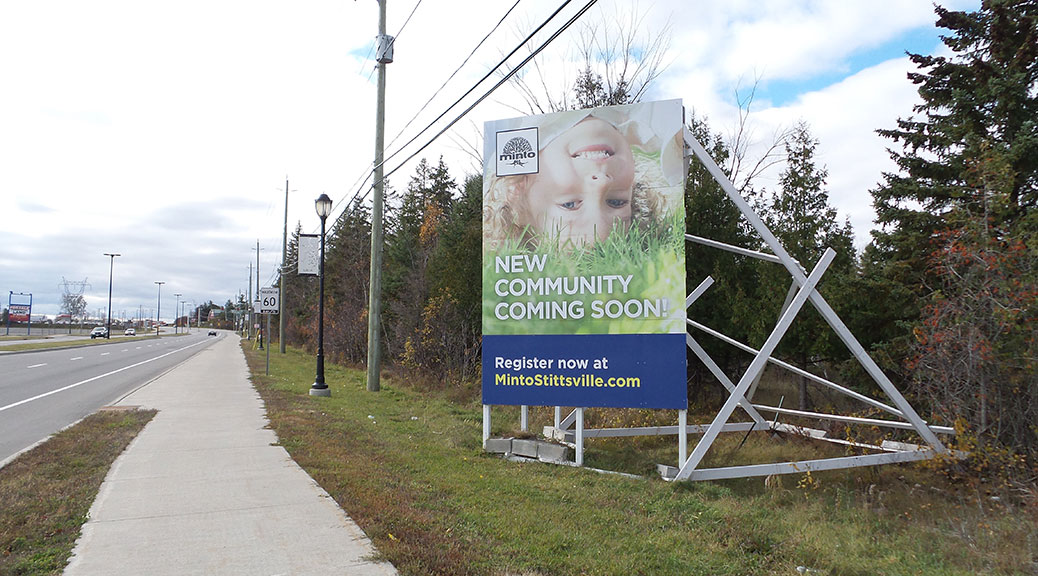 Councillor Shad Qadri provided an update today about the ongoing negotiations between Minto and city staff over the proposed Potter’s Key development.

The development would be located between Echowoods and Jackson Trails, and residents in those existing communities have voiced a number of concerns about the proposal.  One of the big beefs is about a lack of road access from Hazeldean Road.

Minto’s original plans for the subdivision included road access to Hazeldean, but that’s been dropped. Minto doesn’t own the land the road would go through, and hasn’t been able to negotiate a sale with the landowner.

The latest update is that the developer has proposed a temporary gravel road next to the Jackson Trails Plaza on land that Minto owns. Councillor Qadri stopped short of calling that a bad idea, but is encouraging residents to share their feedback.

“If I do not hear that the community supports this temporary connection as a compromise then this item will be going forward to the City’s Planning Committee on February 23rd, 2016,” he wrote on a Facebook post. “It will be very important to have the community well represented by residents attending and speaking at the Planning Committee meeting.”

Here’s the full text of his note on Facebook:

Please find below the story I am running in my Councillor’s column this week.

Potter’s Key Discussions Continue with City and Developer
The Minto Homes proposed residential development known as Potter’s Key is tentatively scheduled to come forward to the City’s Planning Committee for approval on February 23rd, 2016. The developers have submitted a Plan of Subdivision and Zoning By-Law Amendment application for this proposed development, for information on the development please visit here.

One of the largest concerns raised was the lack of a direct road connection to Hazeldean from this proposed subdivision. Eventually it is anticipated that there will be a connection made through the lands to the south of the proposed subdivision that front onto Hazeldean Road, however this would not occur until the lands have been developed for commercial purposes. The timing for this connection is unknown as these lands are currently for sale.

There have been many discussions on this proposed development with City Staff, the developer, Planning Committee Chair Councillor Harder and myself. We have been working to see if there is any possibility to find a solution that would provide an access to Hazeldean Road. The developer has approached the landowner of the large commercial property, however they were unable to come to an arrangement to provide an access at this time as the land owner is trying to sell the property. Minto Homes has also advised they are not in the position to purchase the property.

There is also another smaller commercial property abutting the southeast corner of the proposed subdivision (located immediately west of the Jackson Trails Plaza). As this land is owned by Minto’s commercial development company I did request they provide a temporary road access to Hazeldean Road to be used by the public through this property. Minto did advise they would be prepared to consider providing this temporary access until 2018 or Spring 2019.

This road would be gravel and Minto will not take responsibility for usage of this road by public. Minto has provided this as an option however I do find the timeline to be short as there may not be many residents living in this development by 2018/2019. The developer noted they are not willing to extend this timeline as they may wish to sell or develop the commercial property in 2019.

The access to Hazeldean Road was one of the largest issues raised, however I am aware there are still other concerns well with the proposal. One of which being the revised proposal presented at the public meeting last Fall showed townhomes backing onto the existing single detached homes on Overland Drive in Jackson Trails. I have expressed concerns with this change in the plans and still waiting for further information from the developer on this item.

I would like to hear feedback from the community on the proposed temporary road connection to Hazeldean Road that could be provided until 2018 or Spring 2019. Please provide me with any feedback you have on the development. The revised plan of subdivision and the revised plan coloured concept plan are available on my website.