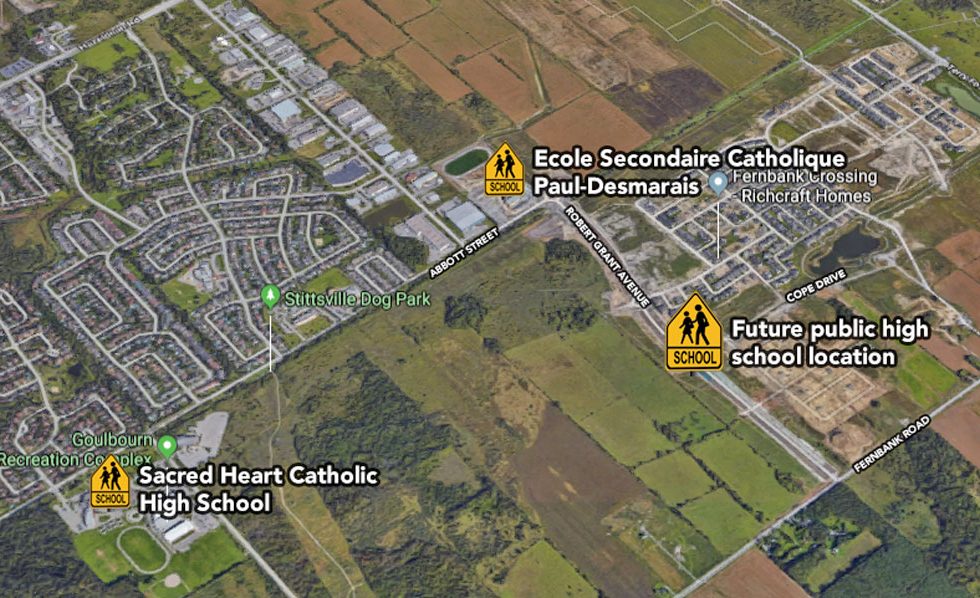 (The map above shows the most likely location for a future public high school at the south-west corner of Robert Grant Avenue and Cope Drive.)

The Ontario government announced Friday it would give the public school board up to $37.4-million to build a public high school in Stittsville. It’s been a long time coming – here’s what comes next and a little background on the campaign to get the funding.

When will it be built? Where?

There’s no timeline yet for when construction will begin, since the Ottawa-Carleton District School Board (OCDSB) still needs to buy the land and wade through the city’s approval processes. There are currently two parcels of land the board has in mind for possible high school use:

Lynn Scott, OCDSB trustee, told StittsvilleCentral.ca the plot on Robert Grant Avenue is the most likely location “simply because we’ve been looking at that site for longer.”

The board expects it can open the school in September 2021, which Scott said was a realistic timeline considering city approvals, consultation and construction. She could not say which will take the most amount of time.

This could be the (approximate) location of the new school on Fernbank in Stittsville, not far from the Goulbourn Rec Centre. #ottnews pic.twitter.com/gDUYxUrcnN

What grades will it offer?

The OCDSB’s needs analysis prescribes a school with a capacity of 1,353 students in grades 7 to 12.

Scott said there are two schools in the area that offer grades 7 and 8 – Goulbourn Middle School and A. Lorne Cassidy. The extra capacity will be needed as Stittsville continues to grow, but she suggested some adjustments will be needed.

“There are going to be changes for everybody coming out of this,” she said. “There will be, I expect, some pretty broad public consultation (on that).”

What happens to South Carleton and other nearby schools?

There will almost certainly be a drop in enrolment for South Carleton High School, which Scott said upcoming public consultation will likely address.

“We will be looking at how best to use South Carleton,” she said. “We still are expecting further growth in Richmond.”

Scott said even when the school opens in Stittsville the OCDSB will need to serve the rural areas in and around Stittsville.

Scott noted the age of South Carleton (built 1952) and suggested it could need renovations or “rightsizing.”

“Basically, now we’ve maintained it so it’s a safe and healthy learning environment,” she said.

Seldom is the “why” ever clear when it comes to politics. Did Friday’s announcement come out of the blue for Scott and the OCDSB?

“Not completely,” Scott said. “The minister (Mitzie Hunter, former minister of education) announced on Monday that the province was investing ($784 million) to build a bunch of new schools.

“So we knew that after that there would be local announcements and over time each school board would be informed whether their project will be funded or not.”

The OCDSB has pushed for a public high school here since 2006, when it made the board’s capital priority list and in every year since.

“At that time, it was felt that the high school would need to be built by 2010 in order to meet the needs of Stittsville’s population growth,” wrote Coun. Shad Qadri on his website after Friday’s news. “However, due to a lack of funding, that did not occur.”

According to Qadri, Stittsville is the only community of its size in the province without a public high school.

For more background check out our public high school archives.