Kick your kitchen fatigue this summer 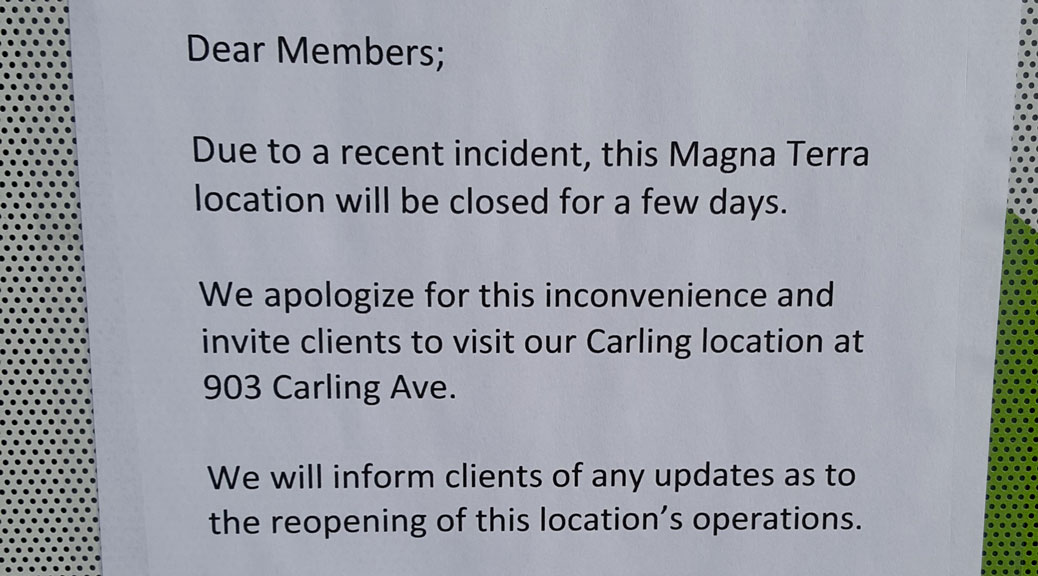 The Magna Terra marijuana dispensary on Iber Road is temporarily closed after an armed robbery on Saturday.

Owner Franco Vigile confirmed to StittsvilleCentral.ca that four armed men broke into the shop, carrying a gun. He says no one was injured.

A sign was posted on the door of the facility today stating that was closed. Customers are being directed to Magna Terra’s Carling Avenue location, and phone calls we’re being forwarded to that location as well. Vigile says the store won’t open again until they’ve reviewed and enhanced their security protocols.

Earlier this week, Ottawa Police raided seven marijuana dispensaries, arresting nine people for charges including possession for the purpose of trafficking and possession of proceeds of crime. Although medical marijuana use is legal in Canada, the drug can only be legally obtained by mail order.

Magna Terra was not one of the locations raided this week.

Statement from Magna Terra owner Franco Vigile regarding this week’s police raids to Ottawa marijuana shops, and last night’s break-in at his store:

I have no comment on dispensaries being shut down. My focus remains solely on that of my own business and continuing to ensure that Magna Terra is able to meet the needs of our medical cannabis patients in a safe and responsible manner.

I would like to see some sort of regulation surrounding dispensaries. I’m fully aware that there are currently no laws that govern this industry or provide any direction as to how or where dispensaries can operate however it is quite clear that there is a very significant public demand for this method of accessing medical cannabis and thats not something that should be overlooked solely because a law doesn’t exist. We’re all humans at the end of the day and we need to appreciate the value behind having facilities like Magna Terra in our communities for the people that need them.

I do not believe Medical Cannabis Clinics are more likely to be targeted. I would be willing to bet that there have been significantly more bank robberies and/or pharmacy robberies this past year than that of dispensaries. I also believe that this most recent incident outlines and reaffirms a much bigger problem/issue for the residents of Ottawa which is the overwhelming and extremely concerning weapon violence that we’ve seen this year. The last figure I heard of was that of 58 shootings having occurred so far this year. Zero of those shootings have involved dispensaries from my knowledge.

Company protocol ensures that there is limited amounts of both medicine and cash that are kept on site and therefor we can confirm that the amount stolen was insignificant. Our real frustration derives from the fact that we now cannot be there for our members until the facility is back in working order and we feel it is safe and secure for both our staff and our members.

Magna Terra remains committed to providing safe and convenient access to those medical cannabis patients that are in need of us. We will use this incident as a learning lesson to further enhance our security system and continue to work on preventative protocols in order to hopefully prevent this from re-occurring.

We’d also like to thank the Ottawa Police for their immediate response and efforts to ensure our staff were safe.

UPDATE: An additional report from the Ottawa Citizen Sunday evening:

Three men robbed the dispensary around 7:30 p.m. Saturday night, escaping with three large garbage bags of cannabis products and some cash, said Ottawa police Staff Sgt. Jamie Harper. Two of the men concealed their faces with hoodies or neckwarmers, and one had a silver handgun, he said. Store employees were not injured.

“Obviously this was a planned attack,” said Harper. He compared it to pharmacies that are robbed for fentanyl and other drugs that have street value. “There is always a criminal element out looking for this type of product.”