Come out and meet the Stittsville Lions at their open house

Note: This article was written by Danny Kingsbury for his blog “DK Blog and Photography”. Danny has kindly allowed Stittsville Central to share his piece. (The feature photo was taken a few days before demolition. The shot was from Danny’s parked location on Shea Road.)

What’s the old Mark Twain saying? Buy land, they’re not making it anymore. For Sale signs are few and far between these days. We walk everyday through our neighbourhood so we notice them all. When one does appear, you can set your watch to the SOLD notice. In fact, we see SOLD signs on properties not ever knowing they were listed in the first place!! There was a house on the market for $829,000 recently, which we thought was pretty outrageous and it sold a few days later for $890,000. No conditions!!!! Wow! I remember selling a house where the buyers wanted 4sq ft of vinyl siding fixed before closing. That’s the difference between a buyers and sellers market. Times change. If you have a home, there has never been a hotter market. The problem is you then logically need to find a new one. Good luck with that. We’re not in the market to sell but we love following along.

In the last few years, farmland has been developed for housing all around us in Stittsville, Kanata and Barrhaven. And to the best of my knowledge, it’s all pre-sold! Closing dates are 12-18 months. Why so much development? It’s not pandemic related really. Maybe some of the most recent activity is. Mostly because Ottawa in particular has a very stable work force with the Federal Government and tech employment. Medical, University, financial and the Military also are large employers. Skilled labour is in short supply. Many people are moving to the NCR. And with the cheapest mortgage rates in history, many people are moving up to bigger and better homes. So with competition for inventory and a relatively high income population, comes the need for housing. It’s not ending soon.

With all this development discussion, there is one particular parcel of land that caught my attention recently. To obsession levels. It’s a multi-acre mystery section that I’ve always admired from the outside looking in. It was fully wooded and contained a century home that had wonderfully been expanded over the years. It was built in 1904 best guess. Of course we never knew that or anything about the house, as it was not visible from any of the streets that surrounded it. There was only a driveway entrance off Fernbank. Very private. I’d always wondered what it looked like in there. A forest home in the city. I got my wish a month ago when a developer suddenly cleared the land and exposed the entire property. I say suddenly but honestly it was in the works for at least 2 years after the current owner sold it to developers.

It was interesting and shocking to see it all finally but it was sad as well. That wasn’t really the way I wanted to discover it. Everything was gone!!!! All the trees were cleared. It exposed the house that had been hidden for decades. It too was marked for demolition. And with my interest gaining momentum. I watched it come down over a 3 day stake out. I met some interesting people too while I watched and waited.

After doing a bit of research I learned the property was sold in 2018 for $1.9 million to a developer. Given the upside for each party that seemed like a fair price then. It’s worth a lot more now I suspect as per the anecdote above about how hot the market is. The owner bought elsewhere in Stittsville after living in this house on this acreage for over 20 years. This house sat empty for nearly 3 years and as you can imagine, fell into disrepair. I know that because the Mother of the last owner was one of the interesting people who drove by while I was taking photographs. We introduced ourselves and started to chat. Her name is Joan. It’s a small world and even smaller town. Her son is a successful business owner. We have purchased many pool products from his shop. The story is starting to come together as I tried to connect dots. Joan’s husband Bruce stopped by as well the next day.

The next day, another gentlemen was there at the same time as Joan and her husband Bruce returned to check on the progress. The 4 of us started to chat on the road. It was our first gathering since I started parking here. Fun. Turns out the gentleman owned this place from 1963 to 1990. His name is Carl Ashton. He’s 85 years old and has a 1000 stories about everywhere around here. What an interesting man. I’ve spent a lot of time talking to him over the last few days as he was only too happy to share his insight and offer me information. He bought 200 acres for $23,000 in 63. Taxes were $90 a year. It was all one large section of land. He owned the property where the Goulbourn Rec centre now stands and Sacred Heart Catholic High school, where our youngest attended. Carl talked about paths, ponds and an apple orchard on the property. Sounded heavenly.

Carl told me he bought the property from a World War I vet named James Harvey Finlay, who served in the 68th Canadian Field Battery Artillery Unit in Russia, 1918. Finlay purchased it in 1952. He’s in this picture 4th from the right.

Prior to Finlay buying the house and property it was owned by 2 sisters, last name Tennant, who are buried in the United Church cemetery on Main and Fernbank. Finlay purchased from the estate of Emma Tennant. Who lived from 1870-1945. There is no information that I can find about who owned the place from when it was built to the Tennant sisters occupancy. Perhaps it was them?

After more chatting, Carl took off but came back with his wife, Eva. She was sad to see the house in this state of course. At the time it was not yet down. I told her I have lots of photos that’ll share and she was happy to share some too.

There is nothing new about rural land being developed into housing communities. That’s how the suburbs were born. It’s been that way since the 40’s all over the US and Canada. I’ve lived in suburbs all my life. This particular development somehow garnered my attention and I wanted to document it. I’ve seen other houses and farm fields developed but maybe it’s because it’s so close to my house, I’m more interested. I make no judgement on right or wrong here. Both parties came to a financial agreement and the rest is history. There was no expropriation or ill will. If there was one thing I’d hope to capture more of is signs of heritage in the home. There wasn’t much of that. It had been modernized nicely and I’m sure was a beautiful place to live. I did enter the property on the day before it fell and took many photos showing the house, not in its finest hour, but I think the visuals are interesting. This brief look back and the following photo essay is both a tribute to the century home and its owners. All of them. Dave Duncan, Ian MacDonald, Carl Ashton, James Finlay and Emma Tennant et al. Each of them made this house a home while owning it. But a house is just a house without people. It’s also a bit of a historic record of its last few days.

Maybe the new homeowners in this new subdivision may find this one day and take some interest as well.

Photos below. There’s a ton of them. Enjoy. 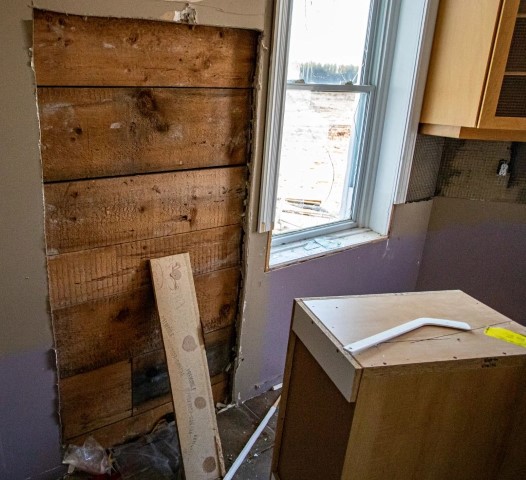 I hoped you enjoyed this photo essay. Once again, many thanks and much respect to all the past owners and good luck to the new community.

Danny has written some timely and fascinating articles on his blog – DK Blog and Photography. We encourage you to take the time to visit his blog page.

9 thoughts on “Stittsville’s Land Boom: photos and history of a Fernbank Road home”