March break will be crafty at Goulbourn Museum 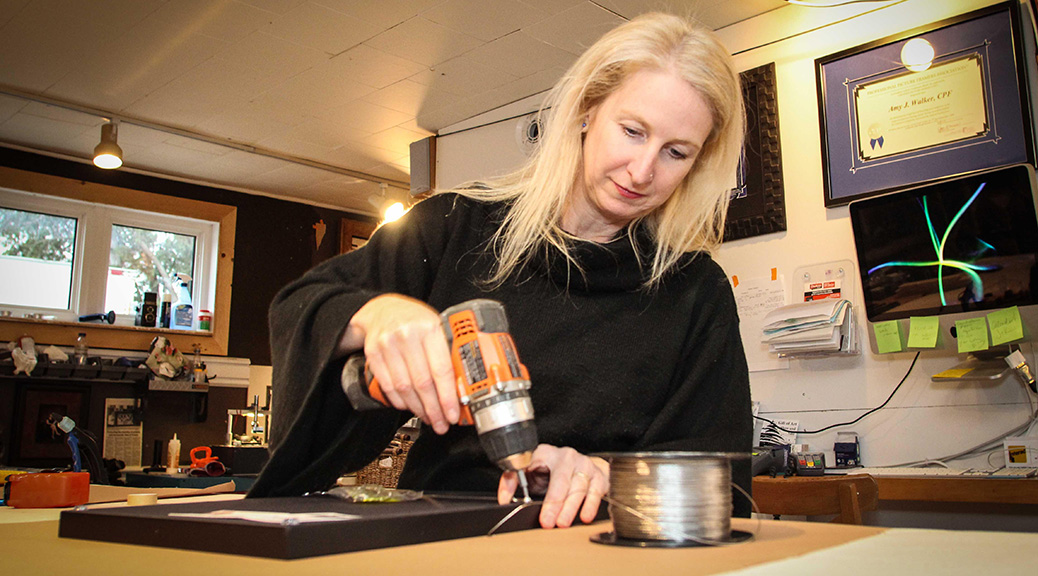 Jim and Amy Walker own Walkerworks Framing on Beverly Street at Stittsville Main.  Walkerworks started as a home-based business on Fernbank Road, then a retail shop in Perth, before winding up in Stittsville.

Their current spot is actually their second location since moving to Stittsville. They used to be next to the Legion across the street.  Not only do the Walkers own the shop, they also live right next door with their young family.

Walkerworks is one of the local businesses taking part in Support Local Stittsville on December 6, a day to encourage residents to discover our local shops and restaurants. You can see the full list of participating businesses here.

I visited their shop recently to ask them about their business and why they’ve chosen to live and work in Stittsville.

GG: How did you end up opening a framing shop in Stittsville?

AMY: We grew up in Kanata, and we were living just up Fernbank. We’ve framed since high school, we’re both from the fine arts department. You paint, you draw, and finally you have to get stuff on the walls.  We got married and started the business, doing photography and weddings. Back then we were doing framing out of our home (on Fernbank).

JIM: The reason we opened in Perth in the first place was we watned to test the market and the cost of making a leap into a retail location was minimal compared to Kanata-Stittsville. In the late 90’s, retail locations were as much, and start of them more. Retail rents have actually come down again. It was going to be astronomical. It’s still pretty expensive.

AMY: We moved here (to Stittsville) because we have children. Our oldest was about to go to school.   We said, ‘we’ve go to do one of the other – move the family or move the business!

JIM: Stittsville is very familiar for Amy and I. We both grew up in Kanata. At the time we were in Kanata, Kanata was very much like Stittsville is now: a growing, booming population.  Back when we were kids, Stittsville was still a village, its own entity. We went to high school with all the kids from Stittsville – they got bused in. We have a lot of acquaintances from high school days from the Stittsville area. We both knew we wanted to be based somewhere locally, in the west end of Ottawa. We had no interest in going anywhere else.

We had the decision of either sell our house and move to Perth and keep the shop were it was, become full-time residents in Perth, or move the shop in Stittsville.  It didn’t take us long to survive.

JIM: It was bittersweet to leave Perth, it was a good community to do business in.  When we were in Perth it had a town council that was very strongly committed to doing what they could to improve the business atmosphere. The last year we were there the council changed and had no interest in promoting or doing any kind of effort or exppenditure.  In this years since we’ve left, a lot of small shops have closed up.

GG: So did you meet in high school in Kanata?

AMY:  I went to Earl, he want to A.Y. I was 16, he was 17.  It was Halloween 1986.  We were both in the arts departments of our high schools.  Jim is a very handy guy, and he got me into the framing aspect. Back then it was pretty crappy framing!

JIM: I used to frame my stuff in high school out of materials I bought at the lumber yard and I would make it myself.   After university I worked at a frame shop in Ottawa.

AMY: He was hired, and within a week the framer quit – and they said “Jim, you’re our framer!” He got thrown into it, and realized he liked it . He showed me, and I realized i liked it. I get to design, I get to bring it right through to a finished product that has a timeline… I still love framing, I still love designing and doing the end product.

GG: Has the framing industry changed over the past 20 years?

JIM: Materials have changed. There’s always advances in the make-up and constitution of materials, and best practices. Not sweeping changes, but improvements and refinements. The museum glass, for instance, that has optical coating on it. 15 years ago it wasn’t around The research and development had just been finished and it was astronomically expensive. Now it’s almost our standard glass.

AMY: The 80’s were the boom for custom picture framing shops. They made money hand over fist.  The American shops would have a head designer, some designers working under them, they would have a backshop. You’d have people lining up waiting for you. They’d make piles of money.

AMY: We got into framing after all the money was done! We do it for the love.

GG: Do the types of things that people want framed change?

JIM: From a consumer standpoint it hasn’t, except the styles of frames.

AMY: In the 70’s the commercial moulding was thin, and you couldn’t get these thick wide ones. Mouldings have really changed. There’s really exciting, gorgeous stuff going out. Colours, textures, types of wood. There’s a new chalkboard moulding that you can actually write on.

JIM: Framing follows interior decorating, so if you go look at the paint swatches that are current now, the mattes will follow the same sort of lines.  Whole sections of espresso colours that weren’t around 10 years ago.

GG: What about – do any projects stand out for you since you’ve been in Stittsville?

AMY: We’re a different shop in that we’re here. If I can think it, Jim can do it!  A lot of frame shops they design and they order in their frames already joined – some don’t even cut their own mattes.  We do everything here, we cut the mattes, we can make stacked frames.

One thing that stands out is – we had a client who had this big built-in bookshelf and he wanted a shadowbox made with all these wonderful things to remind him of his time with his grandfather. In that was a gun (obviously that didn’t fire any more), his grandfather was a railway conductor, so his conductor’s hat, a bottle of Crown Royal from ‘67 that had never been opened, and other pictures and objects.  (You can see the finished product here.)

JIM: We did a violin for a client, it was her grandfather’s violin. Nobody in the family played it anymore but it was very sentimental to her. It was in a nice shadowbox. Any object we put into a shadowbox – it’s our mandate that you could take the object out and it’s not destroyed. It’s not glued in our nailed in.  If you took the violin out you could be playing it within 20 seconds after taking it out.

AMY: It is craftmanship – we’re a little different – I don’t care how many framing stores pop open, we do something entirely different.

GG: What is it like to run a business on Stittsville Main Street these days?

JIM: We were in a really good Business Improvement Area (BIA) in Perth, and it did things. It worked to promote and develop Maple Fest, which is a completely made-up festival in Perth during maple syrup season, totally generated by the BIA. Maple producers come in, all the stores have maple promotions, things like that.

GG: How does an event like that that help a framing store?

JIM: It doesn’t really affect us directly, it’s not going to generate immediate sales, but it’s the intensity of people. I would frame up the ornamental maple syrup jugs, we would put those in a shadowbox.  We would go around and buy the antique cans from the producers and put them in frames, and it’s amazing – I would have one from Temple’s sugarbush, and someone who worked there or was a relative – we’d sell a few of them.

We have a lot of repeat customers. Customers who knew us from Perth still come and see is. Residents in Stittsville are great, they really support us.  We don’t spend a lot on advertising.  Being out in the community helps, being involved in the school. We’ve volunteered at the school, and I’ve been involved in sports, soccer in the summer.  We don’t get a lot of business that way.

GG: So you’re planning to stay here for the long term?

JIM: It’s going to take me the rest of my life to fix this property up! These two buildings – we bought the corner – this building was vacant for five years, and falling down.  Roof leaking, windows leaking.  It’s still not even close to where we want it to be!

Do you know an interesting local business that we should profile?  Send us a note at feedback@stittsvillecentral.ca