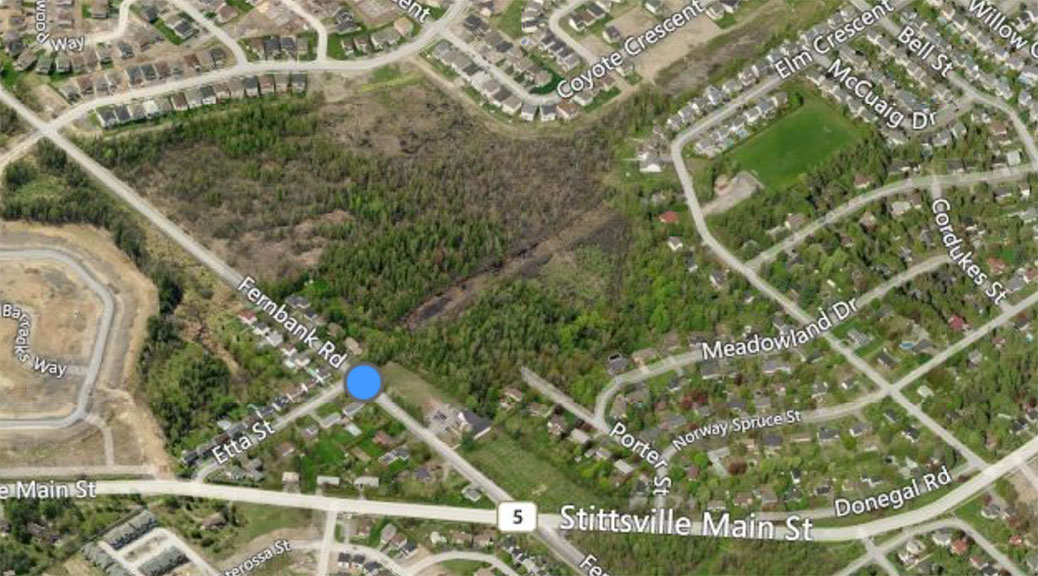 City planners are recommending that councillors formally reject a proposed development at 6279 Fernbank Road due to concerns about flooding and environmental impact.

(UPDATE APRIL 14: The city’s planning committee approved staff’s report to reject the development. It will be presented to city council on Wednesday.)

The land is owned by J.P. Chenier, and Cavanagh Construction is assisting in obtaining development approval. They presented a rezoning application and site plan application to the City in 2013 that including a housing development of over 140 homes.

City staff, residents and the city councillor raised a number of concerns about development’s impact on stormwater management, natural features and wildlife, and how the housing would integrate with the surrounding community.

City planners went back to the developers and asked for changes to their plan and more data to prove that the development would not negatively affect the environment or the surrounding neighbourhood.

The developers filed an appeal to the Ontario Municipal Board. That appeal will be heard by the OMB starting on Monday, April 20.  The developers are arguing that the studies they’ve provided are sufficient, and that the proposed development falls within city and provincial guidelines.

The report that will go to Planning Committee and City Council outlines why the City believes the development should not go ahead as planned. Staff found that various studies the developer submitted were insufficient, out-of-date, and unconvincing.

A summary in the report states:

“The proposal has not fulfilled the review and approval requirements for a draft plan of subdivision and Zoning By-law amendment. Sufficient information has not been provided to demonstrate that there will be no impacts to the adjacent Urban Natural Feature. It has not been demonstrated that the flooding risk to the existing and future homes can be reasonably controlled through proper stormwater management solutions. The applicant failed to provide sufficient information to address concerns related to endangered species, wildlife, hydrogeology, water balance, groundwater, geo-technology, grading, drainage, and stormwater management. Granting approval of the proposed development will compromise the City’s ability to protect the UNF (urban natural feature) and public safety.”

The report also says that City staff received an updated environmental impact study from the developer on March 30.  Staff are currently reviewing the study and will provide an update to the planning committee and councillors this week.

Since January, the developer has been clearing a large area on the property in order to conduct groundwater testing.  Nearby residents says that too many trees have been cleared for the type of testing that’s occurring.  Read more here…